PS: notice that a member may act in one or several working groups.

This IGCP project is a particular importance so much on the scientific level (geology knowledge) that on the economic plan (employment, economic growth and education). It requires an international collaboration related on the geography of the Birimian terrains and the multidisciplinary complexity of the topic. Indeed, from the scientific point of view the geology of the Birimian remains still badly known as a whole. Many sectoral works were carried out in the various Birimian provinces. Meanwhile, deep controversions are noted on the major questions of the Birimian geology. For example the tectonic style of the first Eburnean deformation phase (D1) affecting the Birimian formations, still variously remains interpreted according to the authors. It is the same for the geodynamic model having operated during the Birimian (Fig. 1) and for other geological questions as well. These divergences of viewpoint are to be put in the account of a lack of operational framework of dialogue and exchange between the geologists operating in the Birimian formations. 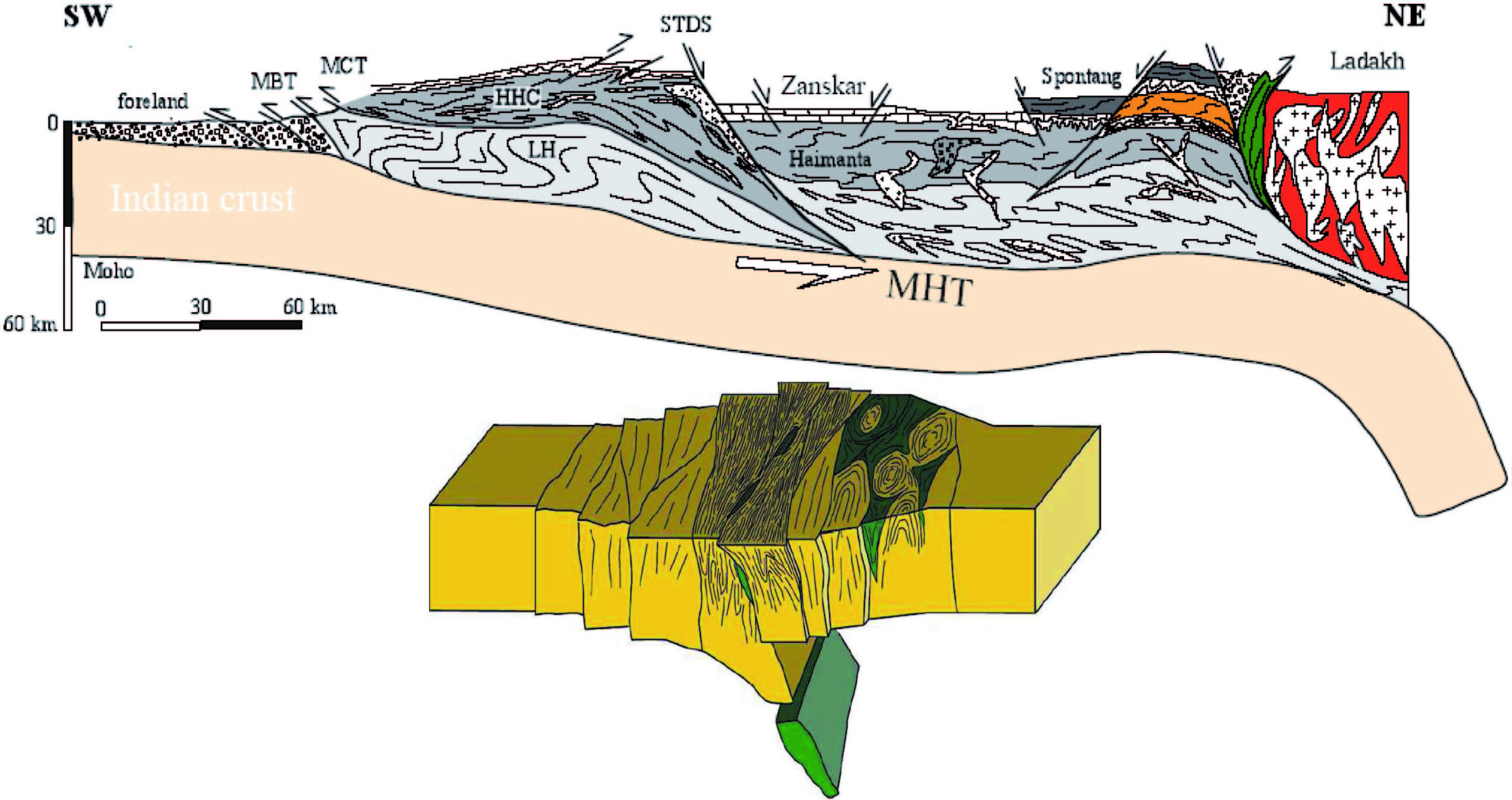 Fig. 1: General diagrams showing the differences in style which could exist between modern mountain ranges (top) and old (bottom) ones, here a good example from India plate. The recent chains are formed by a stacking of relatively rigid layers of crust, along flat faults (thrusts). This creates a crustal thickening and an important topography. In the old collision zones, one can think that the less larger rock rigidity limited the stacking of crustal layers, but supported on the contrary the internal deformation of blocks and the convective matter movements (domes [pop-down] formed by the increase of hot lower crust).

The effects of the traditional exploitation of gold on water quality and the availability of waterresources constitute, undoubtedly, a priority research orientation in the mining exploration. It is consequently essential to know if surface and subsurface water resources will remain appropriate to human consumption and if the quality of surface water remains adequate for the maintenance of watery and terrestrial fauna life. Surface water is directly contaminated by forward thrusts and drainage of acids and contaminants resulting from leaching. The products such as mercury and cyanide are volatile and can settle everywhere transported by the air and deposited in the surrounding medium (Niane, 2014). During the rainy season, these products are washed and involved towards the waterways by surface waters thus contaminating surface water. The density of the hydrographic network in the Kédougou area crossed mainly by Faleme and Gambia rivers, besides many small waterways (brooks and secondary rivers), supports the drainage of the toxic products (residues of extraction). This phenomenon is the most important source of pollution of water related to extraction of metallic ores. The transfer of this pollution towards groundwaters is carried out through the relations between underground water and surface water, but also starting from the mining wells of the ore (Figs. 2-4). 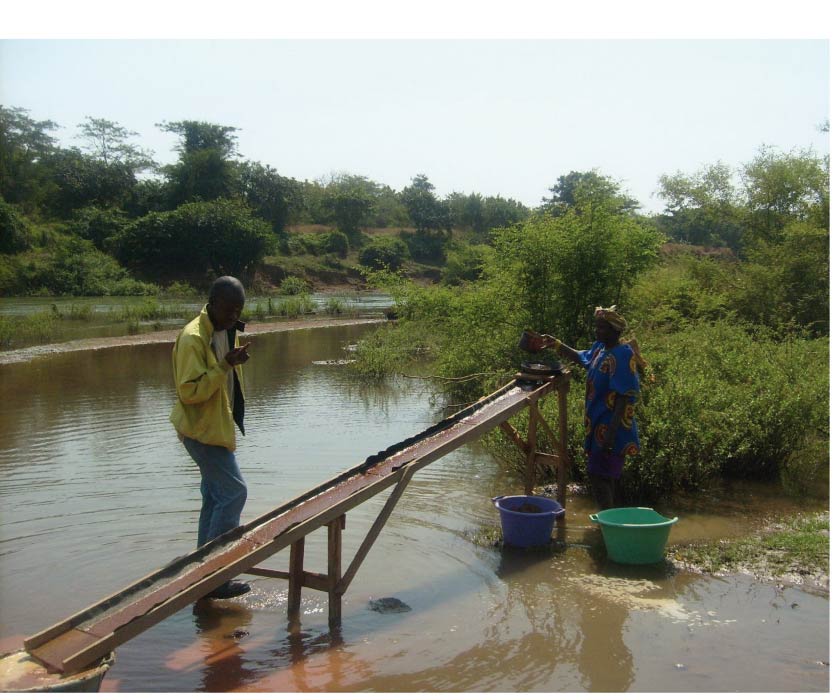 Fig. 2: Water pollution of surface by the residues of scrubbing (Dabo, 2011)

The aquiferous system of the Kédougou area, within the basement sector, is made of aquifers of cracks and alteration of granitic and metamorphic formations. Although the hydrogeologic characteristics of the basement formations are those of a heterogeneous and discontinuous medium, a communication between the various aquiferous levels may exist, resulting in a continuous water table (Diouf, 1999; Sigres, 1994). 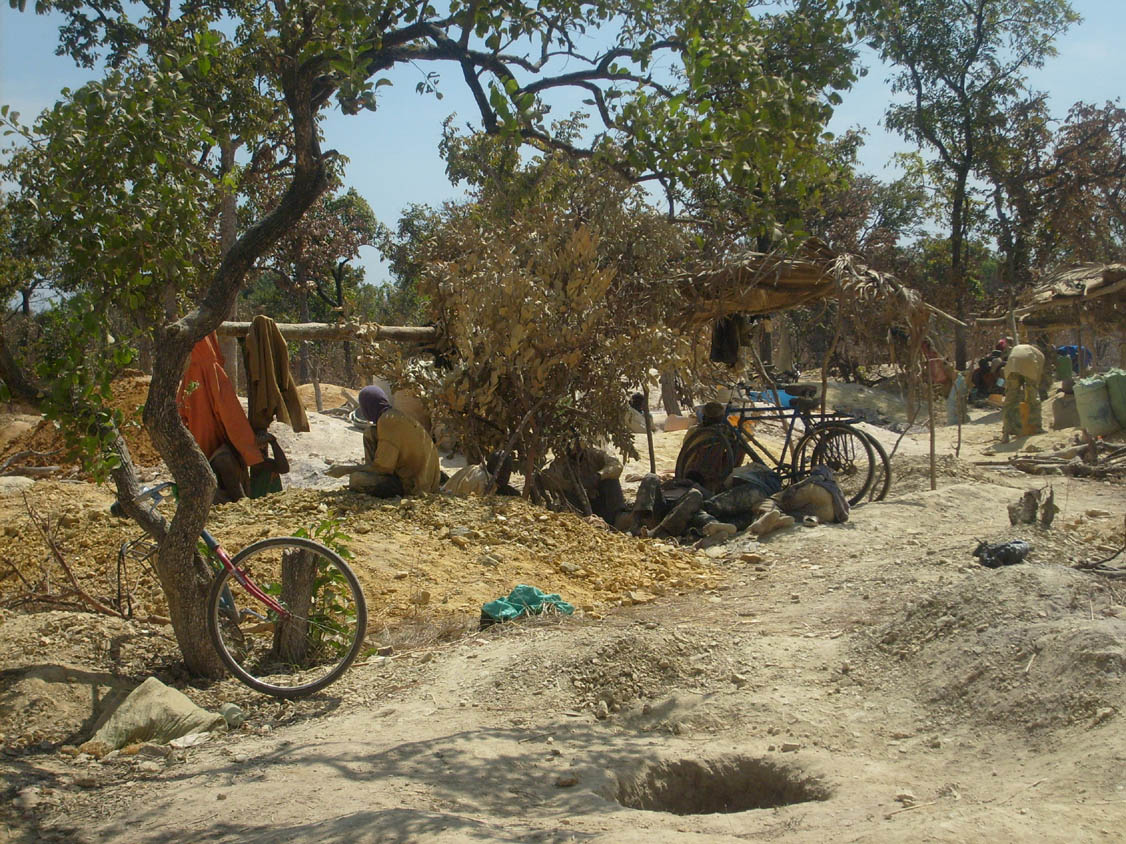 Two aquiferous systems could be identified:

(i) the surface aquiferous system collected by the village wells and

The surface aquiferous system is more vulnerable to pollution by infiltration of polluted water starting from surface water, but especially of many mining wells. However in the zones of cracks where one has a larger permeability, the deep aquifers are quite sensitive to the pollution risk. Here are as many questions with which this IGCP project will try to focus on and propose concerted and consensual answers at the KKI and the WAC scales within the framework of exchanges and international and interdisciplinary collaborations.

Concerning teaching of geology in the West African countries, this project will make it possible to produce a synthetic document specifying current geological knowledge on the Precambrian formations.

The project also relates to the reinforcement of the school programmes in term of contents on the Precambrian geology of the WAC. For this purpose, there exist many scientific publications on the geology of the Birimian formations of the WAC. The work primarily concerns geochemistry, lithology, petrography, geochronolgy, geophysics, geodynamics, georesources, etc. The analysis and the interpretation of the data are often controversial according to areas and authors. These contradictions are explained partly by the lack of framework of dialogue and exchanges to raise the ambiguities and to harmonize knowledge. This project will make it possible to create this framework of dialogue and exchange between the various actors working on the Precambrian formations of the WAC. The objective will be amongst other things to produce an international document of precision on current knowledge of the Birimian geology. This once adopted document could be synthesized and spread in the academic administrations of the various countries concerned in order to be used as guide for a complement of the school programmes regarding geology (Fig. 5). It is thus a question here of carrying out an international work of expert testimony to the service of the state education of the countries concerned in order to fill a gap which exists in the “curricula” of high school education. 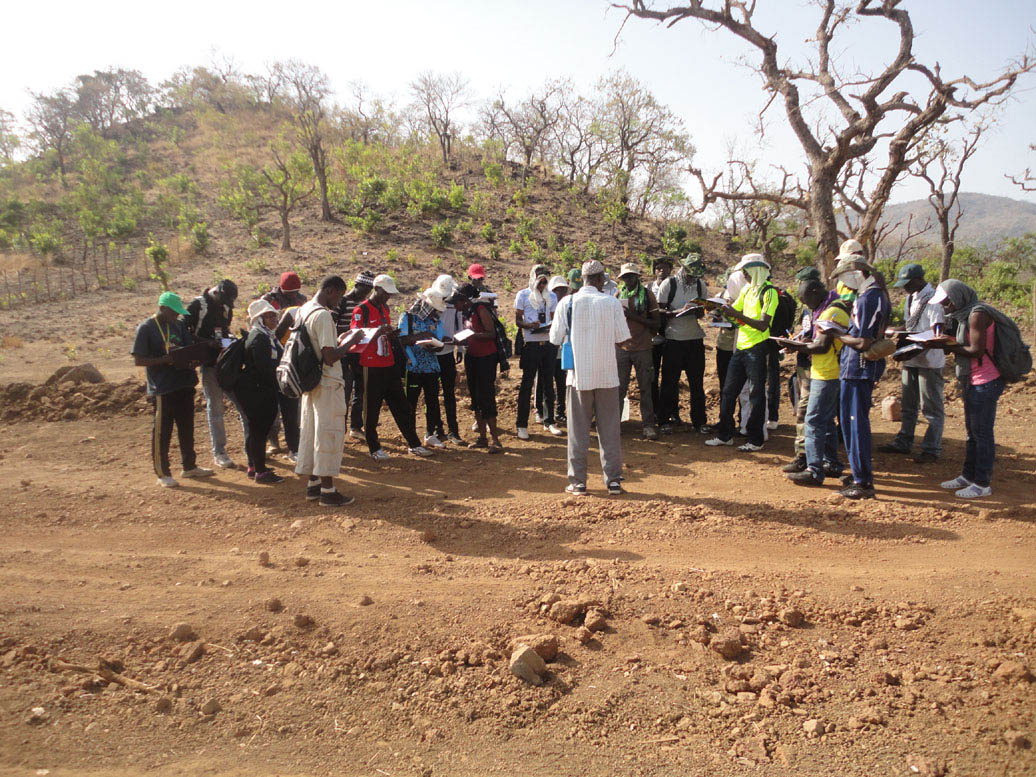 Finally, the results of the project will be an important tool to improve the educational policies related to geology and for decision making in the mining projects.